The Dakar Rally is one of the most daring rallies in the world since its first race in 1978. Normally the races ended in Dakar Senegal, thus the name of the race. But do to some factors, it has seen the race change its course into other regions like the current one in Saudi Arabia.

Among the teams in the rally is the Toyota Dakar program which has been participating in the rally since 2011.

The Toyota Gazoo Racing team won last year’s Dakar race with their Drivers Nasser Al-Attiyah and Mathieu Baumel who are still participating in this years race. They have lined up among others 4 Hilux for this years rally.

The Hilux in context is the GR DKR Hilux T1+

The Truck has a 3.5 ltr Twin Turbo V6 engine under the hood from its cousin the Toyota Land Cruiser 300 GR Sport, Producing 305 kW of power at 5,200 rpm and 650 Nm of torque from 2,000 rpm. All this has been fitted on a larger chassis, larger 37-inch tires from 32-inch wheels with a tire width also increased from 245mm to 320 mm as compared to its predecessor. The suspension system has also increased in travel from 280 mm to 350 mm.

The tyre width has also increased from 245 mm to 320 mm. In all this, the engine has been left in stock form with standard Toyota Turbos and intercoolers being used but with a slight modification on the orientation of the intercooler for the race car. The overall weight of the car has also been increased to 200kg as per the regulations of the race

The Hilux driven by Nasser and Mathieu is currently in the lead with over an hour in time and hopes to bring the win back home to the Pick-up trucks. Let’s keep our Fingers crossed….

Maybe one day I will seat in one of the trucks and give a proper review. Who knows🤷‍♂️ 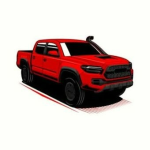 + posts
Share on FacebookShare on TwitterShare on Email
PickUp TrucksJanuary 12, 2023

8 Simple Steps to follow when Changing a Flat Tyre